H is for Hephzibah, 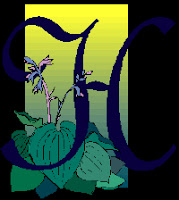 “Manasseh was twelve years old when he became king, and he reigned in Jerusalem fifty-five years. His mother was Hephzibah."
2 Kings 21:1 nlt

Hephzibah was the wife of Hezekiah, a king of Judah (2 Kings 18- 20), though she is not mentioned during his lifetime. King Hezekiah was an awesome king who “did what was pleasing in the Lord’s sight, just as his ancestor David had done." (18:3)

During Hezekiah’s twenty-nine year reign over Judah, Hephzibah saw him remove the pagan shrines, smash the sacred pillars, and cut down the Asherah poles. She witnessed him brake the bronze serpent of Moses because the people of Israel had been offering sacrifices to it (Num. 21:6-9) during the idolatrous time of his father, King Ahaz. The pool and tunnel he constructed to bring water into Jerusalem must have brought a smile to the Queen's face.

Hezekiah trusted the God of Israel. It is said that he clung to the Lord and did not depart from His commandments, and the Lord gave him success after success against their enemies. Hephzibah was queen and wife of an honorable, God-fearing man.

When her king became mortally ill, he prayed to God and God had mercy on him by adding fifteen years to the his life (2 Kings 20:1-11). During the third year of his extended life, our woman of the day delighted the king with the birth of their son Manasseh. Also, during this period, the great king fell into the sin of pride and vulnerability by opening the doors of the treasure house to an entourage of the king of Babylon. The prophet Isaiah confronted the king with the offense and proclaimed that the time would soon come when everything in the palace—all the treasures as well as his children—would be carried off to Babylon.

As a mother, the news of my offspring being taken captive would have broken my heart, but I don’t really know how Hephzibah responded. I do believe she was a good wife and mother because her Hebrew name means “my delight is in her.”

Her name is mentioned by the prophet Isaiah as a symbolical name of Zion, representing the Lord’s favor and delight toward Jerusalem. “…Your name will be the ‘The City of God’s Delight’ and ‘The Bride of God,’ for the Lord delights in you and will claim you as His bride.” Isaiah 62:4 nlt

A favorite verse of mine is “Take delight in the Lord; and he will give you your heart’s desires” (Psalm 37:4 nlt). The desire of my heart is to be a delight to the Lord, pleasing in His sight, and to one day hear, “Well done, my good and faithful servant” (Matt. 5:21, 23). (Maybe I should change my name to Hephzibah.)

Email ThisBlogThis!Share to TwitterShare to FacebookShare to Pinterest
Labels: A-Z Challenge, children, Women of the Bible