The Day Sally lost her Head

[At our writers' group Christmas party we did a little writing. We each started a story and then the each paper was passed to the next person. Each added a few lines after only reading what the writer before them wrote, but not what all had written before them. We enjoyed the laughs that followed in trying to read them all. This is mine...or at least the first paragraph.] 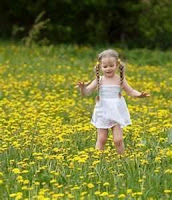 The flowers bloomed beneath her window. A bumble bee fluttered from blossom to blossom. Sally reached her chubby hand toward the yellow daisy, but the bee flew away.

Please, don’t go.” She sobbed “I wanted to play with you. I don’t have anyone to play with.”

Friendless, she continued to search the garden for a companion. A butterfly flitted nearby, but was too fast to catch. 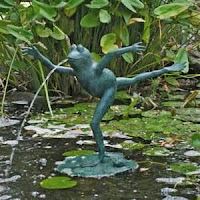 Then she spied a big green frog sitting at the edge of a little pond. Something told her the frog was dangerous, so she cast a magic spell on it, turning the frog into a stool. She sat upon the stool and pondered her next move…to the barber shop or the gun range?

She chose the barber shop as being the lessor of two evils. After all, she reasoned, if she was really going to do this thing she might as well look the part.

She walked in the door and avoided the stares of the men gathered at the side of the shop. Taking a seat she looked up at the barber. “Shave if all off.” 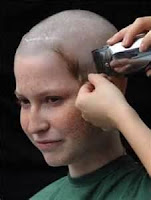 “You sure?” She nodded and cried as her wavy red hair fell to the floor.

“Can I ask why you’re doing this?” asked the barber as he swiped the razor across her head again.

“It’s for my sister, LeeAnne.” She sniffed. “She’s starting chemo today and I don’t want her to feel different than the other kids.”

LeeAnne didn’t mind having her head shaved if her sister had to be bald, then she would too.

After all she lost her head in the car accident when the policeman smashed it back on her snow body.

It didn’t matter if she remained bald. She loved being alive and having saved everyone from a horrible accident—and everyone lived happily ever after.